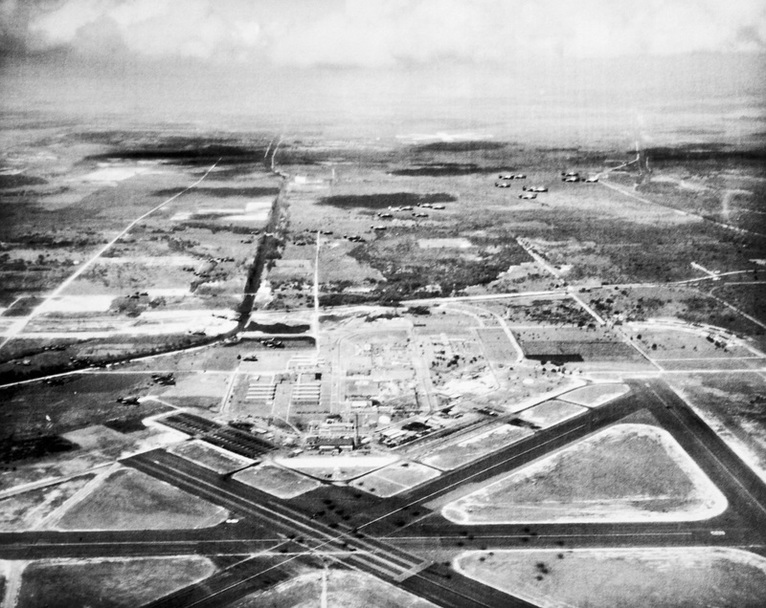 Aerial view of NASFL with a Squadron of Avengers in mid-flight celebrating the end of the war, 1945. © NASFL Museum.
Serving as one among 257 air stations during World War II, the NAS Fort Lauderdale (NASFL)
made a big impact on the South Florida region, and the United States as a whole.
The United States did not enter the war until 1941, but Fort Lauderdale felt the effects sooner than most of the rest of the country. In December 1939, a British cruiser chased the German freighter Arauca into Port Everglades, where she remained until the U.S seized her in 1941, prior to Germany declaring war on the United States. Prior to WWII, Fort Lauderdale was a vacation retreat in  the midst of economic struggles. By December 1941, the Army Corps of Engineers began transforming an abandoned 9-hole golf course and the Merle Fogg Field (known now as the Fort Lauderdale-Hollywood International Airport) into a naval base. The NASFL base was completed and commissioned October 1, 1942. With the close proximity of a protected deep-water port, Fort Lauderdale, a resort town of 20,000 people, was an ideal place. The good weather allowed many hours of flying time, the open sea was good for training, and the Everglades provided a natural bombing range as there was no heavy industry or other military targets to draw enemy fire.

The base was initially used for refitting civil airliners for military service before they were ferried across the South Atlantic to Europe and then North Africa. It later became a main training base for Naval aviators and enlisted Naval air-crewmen of the U.S Navy and Marine Corps aboard aircraft carriers and from  expeditionary airfields ashore. Originally conceived as an adjunct to NAS Miami, the NAS Fort Lauderdale became an independent naval base part of the Naval Air Operational Training Command, specializing in TBM/TBF Avenger torpedo bombers. The Avenger was the largest single engine plane used during  the war. It was the first design to feature a new wing-folding mechanism created by Grumman, intended to maximize storage space on an  aircraft carrier. TBM/TBF Avenger Pilot training was taught among other degrees: Radiomen, Machinist's Mates and Ordnancemen, along with radar and fire control operator training.

Also established to work in conjunction with the NASFL were the Naval Air Station Boat Facility, the Fort Lauderdale Navy Section Base, and the Fort Lauderdale Coast Guard Station located at Port Everglades. These units were instrumental in providing practical target bombing practice as well as air and sea rescue operations and retrieving of torpedoes. For example, the USS Absicon was a decoy ship that served in training and the USS Asheville (both operating from Port Everglades) tested experimental weapons.
Images from Naval Air Station Fort Lauderdale 1942 - 1946

Click on arrows to play Slideshow.
​Images © Naval Air Station Fort Lauderdale Museum
The base included an Administration Building, a Senior BOQ, Junior BOQ, Women's (WAVES) Barracks Building, a Ship's Service Building, Theatre, Kitchens, Cafeteria, Service Store, Writing Room and Recreation Hall, Barber Shop, the Sick Bay or Medical Building, Radio Transmitter Building, Control Tower, Brig, Link Trainer Building, Hangar Buildings, Sewage Disposal Plant and barracks for the enlisted personnel. A vast complex of more than 200 buildings of which the majority were built of wood. Local Causeway Lumber Co. supplied most or all of the lumber. Wood floors were cut from the Florida Eastern Pine (a hardwood which is rare now in South Florida). NASFL had a two-tier organizational system, with two officers reporting directly to the Commanding Officer. The Executive Officer was in charge of Base Administration, and the Training Officer headed the Operational Training Unit. The Base Administration division consisted of 12 departments: Supply, Executive, Public Works, Ordnance, Gunnery, Personnel, Medical, Communication, Disbursing, Yard, and Physical Training. Port Everglades Navy Boat Facility fell under the scope of Base Administration. Several sub-divisions followed: Safety, Ship's Service, Navy Management Program, Civil Personnel, and War Bonds. The Operational Training Unit consisted of 8 departments: Flight, Engineering, Operations, Ground Training, Gunnery, Aircrew Training, Personnel, and Air Plot Depts.
Fort Lauderdale Service Men's Center
In 1942, the City's Chamber of Commerce recognized the need to entertain the servicemen and early efforts to enlist the aid of the USO were unsuccessful. This led to the creation of the Fort Lauderdale Service Men's Center on Las Olas Boulevard. on SE 1st Ave. The large unfinished building was donated by Robert H. Gore, owner of the Fort Lauderdale News. Local businesses and citizens donated all materials and labor to complete what has been described as “the busiest and happiest place in South Florida” and “the most beautiful Service Center in the United States.”  This Center served more than 2 million servicemen and women during wartime.The embrace of the community had much to do with Broward County's growth into a major metropolitan area since many of the men married local girls and settled here.
Click on Arrows to play Slideshow
Images © Naval Air Station Fort Lauderdale Museum
The station was still under construction when the first 16 student pilots and 17 TBM Avengers arrived at the base. During this time, the Bachelor Officer's Quarters had not been built yet. The junior officers were boarded in local hotels, mostly small family-run establishments in downtown Fort Lauderdale. Upon graduation, many would stay at this base or move onto other military sites. From 1942 to 1944 the base would train 1,686 American and British pilots and thousands more of aircrewmen. At peak utilization in April 1945, less than six months before the war was over, there were over 200 aircraft stationed. At the end of war, the base was decommissioned  October 1, 1946, exactly four years after its commissioning.  Broward County played a vital role in the Atlantic, as pilots and their crews sank several German subs. In the Pacific, they helped win many battles including the sinking of the largest battleship in the world: the Yamato, off the coast of Okinawa as the U.S was getting ready to invade Japan. The Military had to mobilize with speed and urgency, thus the number of casualties at military bases was on the high side. A sad but equally historic note is the fact that 95 young Americans lost their lives at this base during 1942-1945— the three most intensive training years of the war.

Barracks as Temporary Schools
When the war ended, the base closed its doors and the buildings were all but forgotten. A large influx of families began arriving in South Florida and the need for school buildings was in great demand. Broward County officials decided to use the barracks of the NAS Fort Lauderdale to house students from several high schools (1949 to 1963), as well as the Junior College of Broward County. Until the college’s first permanent buildings were completed in 1963, students attended classes in the former Naval Air Station Junior High buildings on the western edge of the Airport. When the schools closed, the once sprawling complex of training centers, barracks, dormitories, a hospital, administrative center, theater and supply warehouses were all shut down.

Buildings demolished
The buildings were a quiet reminder of the major flight training facilities of the 1940's. Tucked away from the center of activity, the old base began to deteriorate into a series of dilapidated structures that were virtually unnoticed and unknown to the general public. Then, Broward County assumed control of the property and developed the Fort Lauderdale-Hollywood International Airport. This airport would expand to become one of the premier general aviation airports in the country. Many service members had stayed or returned to the area, spurring an enormous population explosion which dwarfed the 1920's boom.

Building #8 Preserved
In 1979, Allan McElhiney, a former WWII sailor, Ben Langley MCB7, Army Coronel Robert Rawls, Chief Stephen Sedillo USCG, and a handful of history enthusiasts and supporters, established the Naval Air Station Fort Lauderdale Historical Association (NASFLHA). They started on their mission to convince the county to save at least one of the buildings that was scheduled for demolition. From the large naval base, only one building was preserved: Link Trainer Building #8.  The historical association members worked tirelessly to register it to the U.S National Register of Historic Places. They eventually succeeded, and this building became the Naval Air Station Fort Lauderdale Museum. It is the only military Museum in Broward County. Thanks to the commitment to the cause of preservation by the NASFLHA founders, and the important participation of Broward County Commissioner Lori Nance Parrish, who was able to obtain a $200,000 grant from the U.S Transportation Department (Lori's father, W. A. Nance, Jr., served in the Navy during WWII and had been a survivor when the ship he served on was sunk), a part of history was saved. The museum building was eventually relocated at the end of 1999 to where it is today on Perimeter Road, next to the airport. The Naval Air Station provided an important catalyst for the growth and economic expansion of South Florida. The Naval Air Museum that followed after its closure, is a testament on the importance of safeguarding our history for generations to come. Today, Fort Lauderdale is a major yacht and cruise-ship center, one of the nation's biggest tourist destinations, and the heart of a metropolitan division of 1.8 million people. And it is a city that remembers its past. 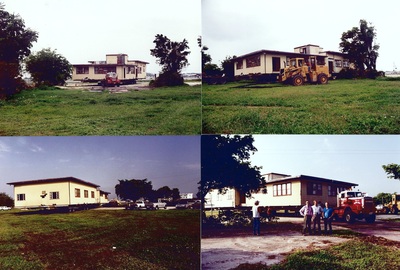 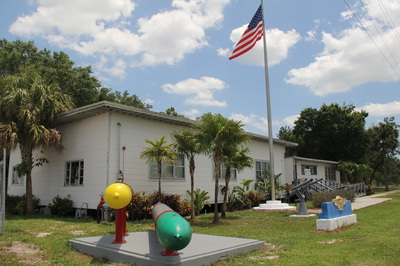