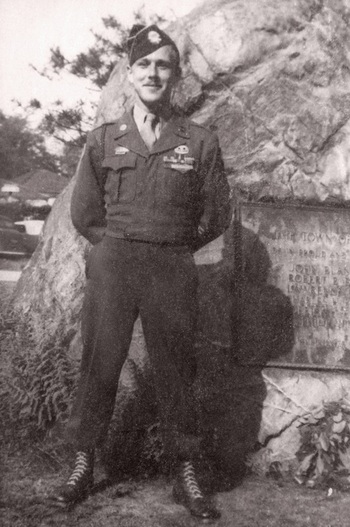 Arthur F Mulock was born in Waltham Massachusetts on July 18, 1923. He graduated from Weston High School, where he was an athlete. He volunteered for the United States Army and the 508th Parachute Infantry Regiment in Oct 1942. Arthur was assigned to the Battalion’s 81mm Mortar Platoon and served in Europe, throughout WWII. He saw considerable action, parachuting into Normandy on D-Day, then at Nijmegen, Holland, and at the Battle of the Bulge in Belgium. On June 10, 1945 the paratroopers of the 508th arrived in Frankfurt, Germany to become part of the Army of Occupation, but primarily as General Dwight D. Eisenhower's Honor Guard at his Headquarters.  Arthur was honorably discharged at the end of WWII.

He returned to his home in Waltham where he married his high school sweetheart June Wales. He enrolled in Springfield College and after graduation he re-entered the Army. He was commissioned in 1949 and was assigned to the Far East, going to Korea with the outbreak of war. In the summer of 1950 he was assigned as a Platoon Leader with L Company, 3rd Battalion, 34th Infantry Regiment, 24th Division. Arthur was initially listed as missing in action for many years until his name appeared on “Johnson's List.” This list was secretly kept by an 18-year old soldier, Wayne Archer (Johnnie) Johnson, from the time he was captured on July 11, 1950 until he was repatriated almost 38 months later. Although Johnson presented his list to a debriefing officer after his release from captivity, it was not made public until 1994 at a reunion of Korean War POW survivors when he again presented his list to his comrades. The list noted that Mulock was not missing in action but had died in captivity. The list included the names of 496 American soldiers who died after being captured.

Further research revealed that Arthur’s name was mistakenly added to Johnson’s list, and a check with the Department of the Army in 2003, shows that Arthur was still on the records as a POW. A former POW named Shorty Estabrook founded a group called the “Tiger Survivors.” The “Tiger Survivors” are those men who survived the grueling march from South Korea to North Korea after being captured. They nicknamed the brutal North Korean Major who was in charge of them the “Tiger.” Estabrook mentioned that Arthur’s name along with his, appeared on a list of American Korean War POW’s taken to Russia for imprisonment but Estabrook said that this was not true. Estabrook said that he remembered seeing Mulock’s name on a blackboard in a school in North Korea that was used as a prison. As a result of a query placed in “The Graybeards,” the Korean War Veterans Association magazine, Joe Gomez of McLoud, Oklahoma wrote that he joined Lieutenant Mulock’s platoon in June 1950 in Japan. Gomez said that the 34th Infantry Regiment, shipped to South Korea July 5, 1950. He said that he was with Mulock on an outpost in Taejon on July 19, 1950 when Mulock was wounded and evacuated. Gomez said that he and another member of the platoon were captured on July 20, 1950 and released from captivity in 1953. Gomez said that he never saw Mulock during his captivity.