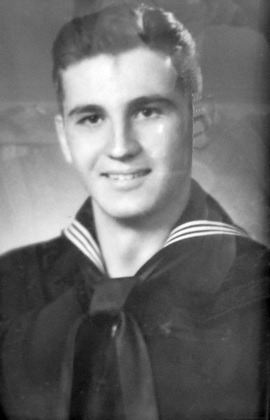 Born in Bronx, N.Y. 1924, A.J. Cusolito operated the USS Ordronaux's (a destroyer-class vessel) S.A. Long Wave Search radar as a RdM 3/C (Radarman) near the end of the war— when the fate of Europe was being decided at Yalta and the Pacific theater was reaching its finale as Allied forces inched closer towards Berlin and Japan.  A.J. Cusolito was aboard the USS Ordronaux on January 3rd, 1945 when it set sail across the Atlantic to London, then to Oran along the coast of Algiers in the Mediterranean.  In February, the Ordronaux would escort a convoy bound for Yalta, along the Crimean Black Sea coast, where the future of Europe was being decided by the Big Three: Roosevelt, Churchill, and Stalin. After the conference, Cusolito's ship was tasked with making sure Churchill survived his return trip from Yalta by escorting his plane out of the Mediterranean— just in case the plane crashed and Churchill needed a pickup. The Ordronaux also took part in extensive training exercises, which to Cusolito, this meant combat against the Germans or Italians was imminent. Cusolito would remark during these days:

“Went to mess today and got the funniest feeling, one I never got before in my life. The feeling I got was that I was going to die. Its a lousy thing to say but I was thinking about it all day.”

Despite his fears, Cusolito's ship would see no more combat until its later mission to the Pacific. Cusolito's feelings that day lend observers a very personal view of what goes through a soldier's mind during war-time, and addresses the nature of bravery, where obstacles are overcome despite personal fears and anxiety about what is to come. The Ordronaux would continue patrol and convoy operations around the Mediterranean until April, where it was ordered West, towards the United States. After a brief stop in New York, the Ordronaux once again set sail, but this time for the Pacific theater. Though the Third Reich was defeated by this time, the war against Japan was less clear cut. Despite losing virtually all naval and air capabilities, as well as millions of troops, the Japanese vowed to continue the fight until the last man, woman, and child. And so Cusolito, aboard the destroyer USS Ordronaux anxiously awaited what lay ahead as his ship's destination drew nearer.

Upon entering the Pacific, the Ordronaux would stop at Pearl Harbor for more training, as they were expected to attack Wake Island and continue moving towards Japan. The Ordronaux was part of a larger fleet consisting of four other destroyers (USS Boyle, USS Chaplain, USS Duncan, USS Chevalier), a Super-Dreadnaught Class Battleship (USS Pennsylvania BB-38), and the aircraft carrier USS Cabot (CVL.-28). On August 1st the Ordronaux moved with this fleet to support operations near Wake Island, where carrier-borne airplanes and warships relentlessly bombarded the island's Japanese defenders. Leaving behind Wake Island unscathed (the island was finally retaken September 4th 1945), Cusolito and the Ordronaux reached Okinawa on August 12, 1945 along with the rest of its battle group. Here Cusolito would witness a night-time air raid, conducted by Japanese torpedo bombers, which crippled the battleship USS Pennsylvania and killed and wounded several dozen sailors. This would turn out to be one of the final battles of the war. Less than a month later Cusolito was in Tokyo Bay —feeling happy as one can feel to be alive and well— when the Japanese finally surrendered, ending the bloodiest conflict mankind had seen before or since.

After the war Anthony Cusolito would move to Hollywood, Florida, where he opened a Butcher's shop named The Ideal Meat Market. He passed away in 2001, and is survived by his two children who donated his log, diary, artifacts from the USS Ordronaux, and photographs:
- Click on arrows to view slideshow -
RETURN TO VETERANS HISTORY PROJECT
Museum's Books | Memberships | Newsletter | NASFL History | Flight 19 | Memorial | Volunteer | Media Kit