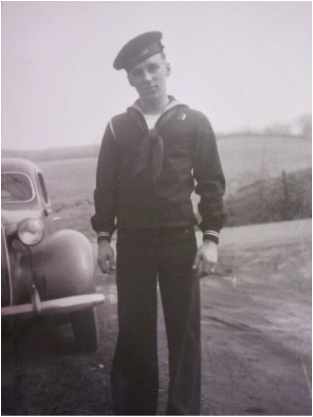 Cyril Dobrovolc was born on July 1, 1924, in Little Falls, New York. Cyril enlisted in the United States Navy in 1943. On February 23, 1944 at about 3:30am, Cyril was to be one of 24 survivors from the Navy Armed Guard, while serving aboard the SS E.G. Seubert when the ship was torpedoed and sank near the Arabian coast, west of Aden:

On the night of February 21st, the sounds of exploding depth charges were heard. The German submarine U-510 made two attacks at Convoy PA-69 (San Alvaro, E.G. Seubert and Erling Brøvig), about 200 miles from Aden. It was reported that two tankers and one freighter from this convoy were sunk, one freighter was left burning and sinking and one other freighter was damaged by one torpedo.

The Erling Brøvig stayed afloat with a broken back and both parts were towed to port. It is not clear whether one ship was hit by two torpedoes. The E.G. Seubert (Commanded by Capt. Ivar Boklund), in station #21 was hit by one torpedo on the port side in the #10 tank and the cross bunkers. The explosion blew one of the after machine guns over the side and started a small fire. The steam smothering line quickly put out the flames. The engines were stopped, as the tanker settled rapidly with a list to port.

Only one lifeboat with 33 men could be launched before the ship suddenly capsized to port and sank by the stern, twelve minutes after the hit. The most of her crew of eight officers, 35 men and 27 armed guards (the ship was armed with one 4in, one 3in and eight 20mm guns) abandoned ship by jumping overboard and had to swim through fuel oil several inches thick. One officer, two men and three armed guards, including the commanding officer died. The survivors were picked up by the HMAS Tamworth (J 181) from the Royal Australian Navy, and HMIS Orissa (J 200) from the Royal Indian Navy, and taken to Aden, arriving on 24 February. In all, 64 men survived: 40 Merchant Marine crew, and 24 U.S Navy Armed Guard crew.

From 1943 to 1946, Cyril also served aboard the USS Gen. H.W. Butler, the SS Alcoa Master, the SS Hugh J. Kilpatrick, the SS Benjamin H. Brewster, the LCI 663, and the LCI (L) 744. Cyril was honorably discharged on February 11, 1946, a decorated World War II veteran. He was awarded the European, African and Middle Eastern Campaign Ribbon, Asiatic Pacific Theatre Ribbon, and the American Theatre Ribbon. In February of 1949, he married the former Barbara Krahn in Forest Hills. They were married for 63 years. Cyril worked for 23 years as a maintenance foreman at Little Falls Hospital, retiring on December 30, 1994. Prior to this employment, he worked for the railroad, General Electric on Broad Street, Utica, and UNIVAC, also in Utica. Cyril Dobrovolc passed away February 20, 2013. 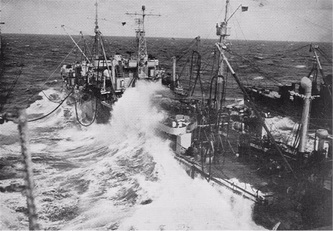 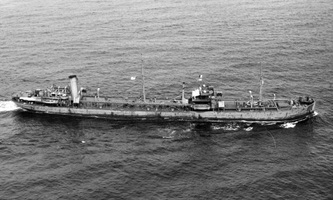 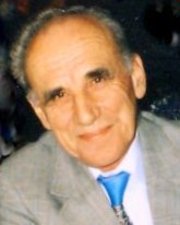