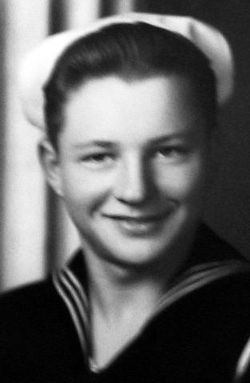 Biography curated and researched by Christy Marcroft
Finalized by Matthew J. Bloom, NASFL Museum volunteers
Charles "Chiz" Ivins was born November 8, 1926 in Glendora, N.J. In the late 1930's and early 1940's, he was one of six brothers who belonged to Boy Scout Troop 80 in Blackwood. In 1942, at age 15, his family moved to Oaklyn, where he met the girl next door and his bride-to-be Emma. He graduated from Collingswood High School, class of 1944. He was the fifth of five brothers who enlisted in the Navy during World War II. Charles enlisted on January 14, 1944 for Flight Training. Charles trained at Naval Air Gunners School in Miami, and at Naval Air Station Fort Lauderdale as an Aviation Radio Man.

“The Combat Aircraft Service Unit, until recently known as Carrier Aircraft Service Unit, is a wartime development, providing an extremely mobile organization to keep land-based Navy planes repaired. They work hand-in-hand with an Acorn.  The Acorn’s Seabee battalion constructs the air strip and base facilities.  After the island air base is completed, the Seabees move on but the Acorn stays to operate the field.  Squadrons fly in with planes and the CASU keeps the planes operating. There are two types of CASU’s today, those based in forward areas west of Hawaii being given the designation CASU (F).  Because it is a highly mobile unit, the CASU is not burdened with equipment.  This belongs to the Acorn.  The CASU remains in commission as a separate entity while the Acorn may be decommissioned and absorbed into an air base after it has been completed.

It is the function of a CASU to service, rearm, and make minor repair on land planes or seaplanes, large or small.  It maintains facilities and equipment in its charge, including personnel facilities.  The CASU also may furnish berthing, messing and service to personnel of air units, both flight and ground personnel. Most CASU in the Navy are based overseas, although there are a number of larger ones on the continent at San Diego, Alameda, Seattle, Quonset, and Norfolk.  The standard CASU complement is 17 officers and 516 men, about a third the size of a standard Acorn.  Both, however, vary widely according to the size of the job they will have at their island base.Because it is a self-contained unit, a CASU has a complete inner organization of its own, consisting of an engineering division, operations division, ordnance, radio and radar, supply, personnel and medical.  Engineering division looks after aircraft repairs, the main function of a CASU.  Operations handles all matters concerning operation of planes attached to or visiting the CASU.  Ordnance handles rearming and guns.  Radio and radar division repairs electronics gear.  Supply division looks after supplies and disbursing.  Personnel is assigned the job of handling officers and men of the CASU, including physical education and recreation. CASU’s on advanced Pacific islands run into the same kind of rugged living conditions as frontline troops. Long hours of night work repairing carrier-type planes, sleepless nights filled with bombings, cold food, disease, casualties, foxholes – all of these are a daily chapter in the kind of warfare they are running into.  Many units landed right behind the Marines and had to build their bases from scratch before they could start maintaining planes.  Their problems are much different from those confronting CASU’s operating on the continent, Squadrons had a habit of dropping in before the official reception committee was all set, supplies were delayed and replacement parts lost, but the CASU’s kept the planes flying, helping to push the Jap back toward Tokyo.”

After the war Charles Ivins was honorably discharged from the Navy on July 6, 1946. He was awarded the WWII Victory Medal. He went onto work at RCA, in Camden and Moorestown. N.J., for 34 years, retiring in 1986. RCA was the original home to the Victor Talking Machine Company. On March 19, 2008 at age 81 Charles Ivins passed away. Chiz and Emma were married for 61 years, and lived for 28 years in the house they built in Lindenwold, N.J.
BACK TO VETERANS HISTORY PROJECT
Museum's Books | Memberships | Newsletter | NASFL History | Flight 19 | Memorial | Volunteer | Media Kit