From airport manager and USMC reserve pilot to air hero and brigadier general: That is Jack Cram's story. He was the first man hired as a Washington State pilot and then the first manager of the Olympia airport. During WWII, he sank a Japanese ship with torpedoes launched from a lumbering PBY before taking command of a ship-busting squadron flying PBJ medium bombers. He fought again in the Korean War. Later, he presided over an aviation industry foundation. War hero, aviation pioneer, aviation executive--he did it all.
Click on rectangle to view Full Screen ^
Jack Randolph Cram: Airport Manager to USMC General - Copyright © Cal Taylor  -   Contact Author   |   Visit Website
The Author Cal Taylor joined the USAF in 1963. After undergraduate navigator training, his first airplane was the B-52H. From there, he crewed in the C-141, AC-130, C-133, C-5 and C-130. Some twelve years were in AF intelligence at the Pentagon, Andrews AFB, Scott AFB and Osan AB, Korea. He retired in 1989. In 2006, he published Remembering an Unsung Giant: The Douglas C-133 Cargomaster and Its People, the definitive history of the airplane. Cal is a member of the American Aviation Historical Society and the Swedish Aviation Historical Society. He has had numerous articles in the journals of both and continues to research and write on aviation topics. 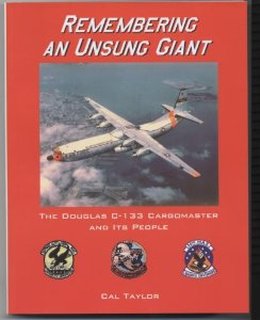 A detailed description of the Douglas C-133 Cargomaster by an author who served as navigator in the Cargomaster during the last two years of its 15-year AF service. A brief history of strategic airlift precedes an account of USAF proof-of-concept testing of turboprop propulsion. C-133 design, development and flight testing provide the foundation for development of air and ground crew and worldwide airlift routes. Topical chapters cover technical information, C-133 employment, support to NASA and the strategic missile force and its employment in the Vietnam War and on special missions of all kinds. Of 50 built, ten C-133s were lost in accidents. The crashes chapter gives complete details of the accidents and the most comprehensive analysis available of the reasons for the losses. Three squadrons flew the C-133 and are detailed in their own chapter, as are histories of each of the fifty airplanes built. The book concludes with a chapter on the never-built Douglas C-132, which would have been the world's largest turboprop aircraft. More than 330 photos and illustrations show the airplanes and people. The index lists over 970 persons as well as other topics and there is an extensive bibliography. The16-page color section shows aircraft interiors and operational activities. Eight fold-out sheets contain large Douglas factory drawings and one large C-133 photograph.