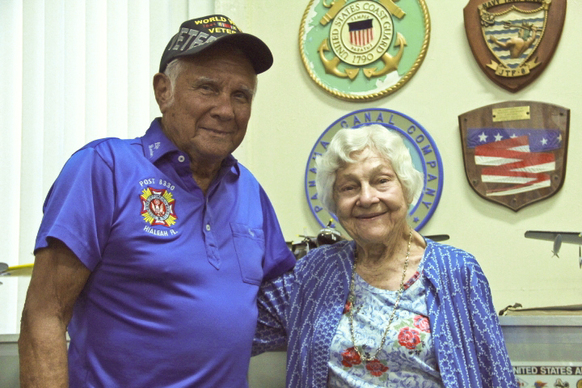 Captain Jeanne Grushinski joined fellow veteran Ray Rivera from the USS Bunkerhill
at the NASFL Museum, where they shared stories about their service in the Navy.
Jeanne Grushinski a Registered Nurse from Stirling New Jersey, was working at Bellevue Hospital, one of the biggest city hospitals in the USA— when she decided to join the Navy in 1942 at the age of 24. She felt she had to do something to help, as the war had touched her close to home. Her family is from Lodc, Poland, a country that was ravaged by Nazi Germany. Jeanne was transferred to her first station at a US Navy Hospital in Philadelphia, when the Battle of Guadalcanal was taking place. This hospital treated returning wounded sailors. After 6 months in Philadelphia, she transferred to NAS Pensacola where she remained for 1 1/2 years. She then got orders for San Leandro US Navy Hospital, where she would experience a more intense work load with total patient and psychiatric care units. The war ended when Jeanne was in San Leandro. Soon after, she received orders to set for the Pacific Islands with a small team of nurses and corpsmen, to provide post-war relief. They made their way from station to station until they got to Okinawa, where the team would take charge of a makeshift Fleet Hospital.

As Jeanne remembers: "The Hospital was between Yonabaru and Naha. Naha was raized to the ground. The nurses quarters was fenced in and we had marine guards patrolling, as well as flood lights all night. We slept in butler huts, which had one bed on each corner. We would take care of native civilians and American military. The corpsmen (male nurses), would bring in the wounded. We women couldn't go into any dangerous areas. We had a limited staff so we sometimes had to go 4 weeks straight on night duty. We stayed in Okinawa for a couple of months, then we were sent off to Guam where we waited for transportation, before making our way to Saipain. While in Saipan, we lived in quonset huts and it was a little more relaxed. It was not a Naval Hospital, but more of a US Navy Dispensary, where a staff of 4 would take care of 10 to 20 people at a time."

Jeanne related the day when a hurricane hit the area; and how they evacuated to the hills and caves with their patients in tow. They all made it through, safe and sound. She also remembers an unsettling experience with a patient: she discovered that the man in front of her was a Japanese soldier. She had taken care of Japanese civilians before, but this was different. Here it was, the enemy at her hands. Emotions overwhelmed her, but she reconciled with the fact that she was in service to make people feel better. She went on performing her job. After a year in Saipan she returned home to the USA. In 1947, Jeanne got married to a Navy pharmacist from New York. She then had to retire because as she says "back then, no women could stay in the military if married." Nine years later, Jeanne went back into the reserves and stayed in the Navy until 1978 when she became a Captain. Jeanne received the American Theater Ribbon medal, the Asiatic Pacific Theater medal and the WWII Ribbon. Captain Jeanne Grushinski passed away November of 2015. 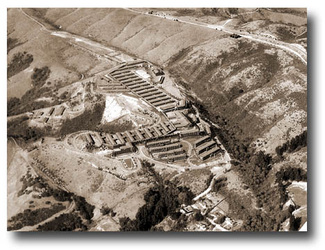 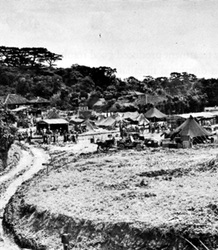 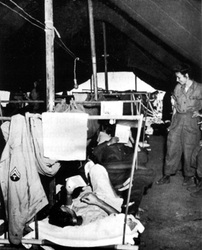 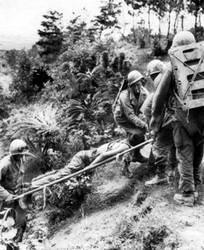