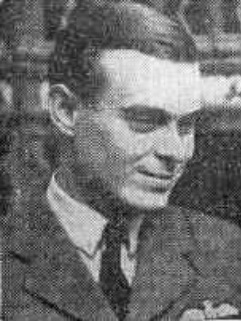 
Maurice J. Baird-Smith was a Pilot for the Royal Air Force (R.A.F.) during World War II. He started his military career as part of the Wellington Squadron No. 37 and took part in an operation to Evacuate the British Army from Dunkerque in 1940. There, they took considerable losses as the fighter command that was assisting them was vastly outnumbered by German troops.

Throughout 1940, Baird-Smith had vital roles in the Battle of Britain and the bombing of Berlin, which signaled the beginning of a long series of raids by the R.A.F. and later assisted by the United States of Army Air Forces (U.S.A.A.F.). In September of 1940, his 37 Squadron flew across half occupied France and then to Malta where there was a Fleet Arm torpedo attack on the Italian Fleet in Taranto. They then traveled to the Middle East and Western Desert and ended with assisting the Greeks against the Italians and Germans. Baird-Smith flew over 30 missions in the Wellington with his crew, until they were posted back to the U.K. in early 1941.

In 1943, Baird-Smith was sent to the United States as a young Wing Commander with battle experience to explain what the war entailed. After this, he returned to war and joined the No. 7 Pathfinder Squadron. In October, their Lancaster was shot down over Berlin by a Messerschmitt 110 Night Fighter and only 3 out of the 7 crew-members were able to safely land into the streets of Berlin. He escaped Berlin alone after the Bombardier was murdered by the crowd and the Navigator was picked up afterwards. Baird-Smith was later picked up near Breslau, where he began his time as a Prisoner of War (P.O.W.).

During his time as P.O.W. in Germany, Baird-Smith would go on two forced marches. The first was during the harsh winter of 1945 and lasted from January 28th to February 8th. Some nights they slept in snow and by the beginning of February a few of his fellow prisoners had frostbite. They were led on the march with no certainty of where they were headed and the last two nights were spent in close quarters on a rail in cattle wagons as they headed towards their destination of Tarmstedt. By this time, many of the prisoners were famished and even suffering from dysentery.

Come Springtime, Montgomery’s 2nd Army was advancing so the German military decided to move Braid-Smith’s camp of P.O.W’s east. During this march, Braid-Smith and two Australian P.O.W’s decided to escape by rolling to a deep ditch by the side of the road. After two days, they decided it would be better to rejoin the forced march. The Germans led them towards their final destination in Lubeck but by the time they arrived, the Germans had lost control of the prisoners.

A half-track British United arrived and freed them on May 4th 1945, and several P.O.W’s took over a German staff car and headed towards the Aerodrome where R.A.F. Dakotas were landing. It took them 4 hours to reach Berlin, but 1 ½ years to finally make it home to England. Once he returned home to England, Braid-Smith was taken to a camp for intelligence debriefing as officials wanted to be certain he was not a German attempting to escape England.

HEROES OF THE WAR
LOCAL CASUALTIES

"Wing-Commander Maurice James Baird-Smith elder son of the Rev. A M. Baird-Smith (Rector of Wheathampstead) and of Mrs. Baird-Smith has been reported missing from recent operations. Further news is anxiously awaited by his wife - formerly Miss Vyvyan Bodley, whom he married at Westminster Abbey in September last - by his parents and by many friends in Wheathampstead. The young officer's brilliant career has been followed with the greatest interest in the village, where he had grown to manhood, and where he had established himself firmly in the hearts of all.  He was formerly a member of the choir and a bell-ringer at the Parish Church.

Wing-commander Baird-Smith was educated at Westminster School. In 1936 he took a year's commission in the R.A.F., and was then placed on the Officers' Reserve. Called up soon after the outbreak of war, he commenced duties as a bombing instructor. He took part in a number of raids on Germany before being transferred to the Middle East. Here he distinguished himself by playing an outstanding part in a night raid on Rhodes Island. For this action the young officer, then a 22-year-old Flight Lieutenant, was awarded the Distinguished Flying Cross. On his homecoming, members of the Wheathampstead Branch of the British Legion prevailed upon him to accept from them a memento as a token of their admiration of his gallantry. For some time he remained in this country, attached to the Air Ministry Staff, and last Summer he visited the United States for a lecture tour. His engagement was announced about that time to Miss Bodley, only daughter of Major J. R. C. and Mrs. Bodley of 20 Cygnet House, King's-road, London, S.W.3"
- Click on arrows to view slideshow -
RETURN TO VETERANS HISTORY PROJECT
Museum's Books | Memberships | Newsletter | NASFL History | Flight 19 | Memorial | Volunteer | Media Kit