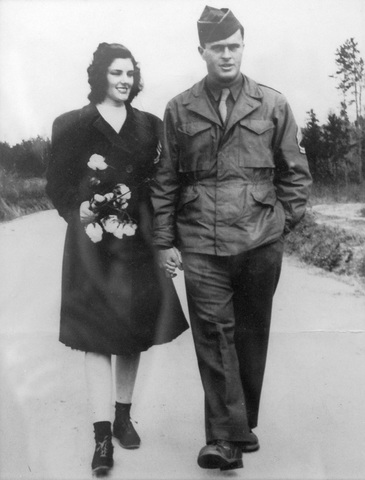 Barbara & Paul Bradley.
Paul Bradley was born in Philadelphia, Pennsylvania. His parents moved to New Jersey where he attended Atlantic City High School. Paul trained in the Army at Camp Butner in North Carolina. He served in the Army during World War II and was wounded in action by German artillery fire. He returned home in 1946, married his high school sweetheart Barbara, and graduated from the University of Pennsylvania School of Design. In 1950, the couple moved to Broward County, where he worked as an architect.

Paul Bradley worked throughout South Florida in the development and construction of public works, hotels, and subdivisions. Paul was also an artist who specialized in pen and ink drawings; with subjects such as lighthouses, nature landscapes, military airplanes & ships as well as depictions of WWII battles. Paul Bradley was a Director at the Naval Air Station Fort Lauderdale Historical Association, which oversees this Museum. He donated many of his line drawings which you can see on exhibit.

On May 2011, NASFL Museum President Allan McElhiney presented a plaque to member Paul Bradley, in recognition for his many years of outstanding dedication and contribution to military history.

Mr. Bradley illustrated books, including "Florida Lighthouse Trail" in 2001. His artwork reached national prominence in 2003 when the Postal Service unveiled a commemorative stamped envelope emblazoned with a rendition of the Hillsboro Inlet Lighthouse he created. Auctions of his artwork of the 30 historic lighthouses in Florida helped raise money for the restoration of this historic Lighthouse. He helped found the Florida Lighthouse Association in 1996 and served on the board from 2003 - 07.

Sgt. Paul Bradley was injured in a fierce battle at Oberwessel / St Goar, by the shore of the Rhine River in Germany. As he remembered: "Several units were attached to the 89th Infantry Division for the river crossing, like mobile anti-craft guns, heavy artillery and combat engineers and other units. We were part of a major campaign, involving a big impediment-- to capture the heartland of Germany. Many historians to this day, still think that crossing the Rhine river was a tactical blunder, because so many of us were wounded or killed. Nevertheless, we crossed from Oberwesel, just below St. Goar where the main crossing took place. St. Goarshausen was the main objective."

THE STORY OF THE 89th INFANTRY DIVISION - From "Rolling Ahead!" a small booklet covering the history of the 89th Infantry Division. This booklet is one of the series of G.I. Stories published by the Stars & Stripes in Paris in 1944-1945:

"MARCH 26, 1945, 0330 hours: The Germans were dug into the cliffs. Machine guns and 20mms bristled from air raid bunkers, behind terraced walls. Snipers crouched on rooftops and spotters waited in castle OPs, perched along the rim of the gorge. Six hundred feet below, the Rhine gleamed under a faint moon. At three points along the west bank, men of the 89th Infantry Division pushed off in assault boats, huddled low and paddled vigorously against the current. The division's second big river crossing in less than two weeks of combat was under way at Wellmich, at St. Goar and Oberwesel. The mission: to secure and hold a bridgehead at all cost; to climb the sheer cliffs; to drive into the wooded heights beyond. For a green outfit, many of whose men were under fire for the first time, this was a tough assignment. An 88 shell wiped out three boats and an engineer launching crew on the beach at St. Goar. As the frail craft slipped to midstream, German flares floodlighted the gorge from shore to shore. Camouflaged 20mms slammed shells at the oncoming boats, tore paddles from the men's hands, blew one boat to bits and tossed the doughs into the water. Somehow, the boats kept coming. The men swam or waded ashore. Reorganizing quickly on the waterfront, they crawled up the stone embankments, carved out a toe-hold and hung on. Boatload after boatload fought its way across the 250 yards of open water, battling drift as well as Nazis. By noon approximately five battalions were across the river. The bridgehead was secure..."

Paul remembered the confusion of the battle: he was engaged in firing his weapon to targets across the river, behind the protection from one of the hills in the area, when he was shot by German artillery. Suddenly, everything went blank. He awoke to the movement of a fast-traveling vehicle where he learned that he was shot, and that he was taken to the St. Gore Aid Station. When they arrived, he recollected that he almost collapsed from loosing blood. And he also vividly remembered the building being hit by bombs, as he was getting plasma.

Mr. Bradley is pre-deceased by one son and his wife. In addition to his daughter Pat Bradley, of Coral Springs, he is survived by daughters Barbara Bradley, of Albuquerque, N.M.; Sherry Bradley, of Santa Fe, N.M.; son Peter Bradley, of Pompano Beach; seven grandchildren and four great-grandchildren. Paul Mayberry Bradley, Jr., architect and artist, died at his Wilton Manors home January 19, 2014. He was 91.
A sample of his works is on exhibit at the Naval Air Station Fort Lauderdale Museum
BACK TO VETERANS HISTORY
Museum's Books | Memberships | Newsletter | NASFL History | Flight 19 | Memorial | Volunteer | Media Kit