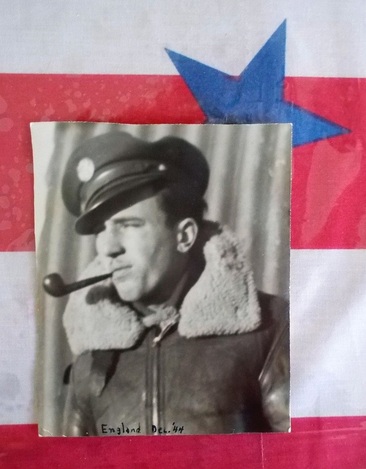 The following Biography was written by Percy Paget, an Army Air Corps Toggleer, serving in Europe during World War II

-View a Slideshow at the end of this biography-
Joining the Army Air Corps and into Nuthampstead, England: the base for the 398th Bomb Group:

"The thirty months I spent in the Army impacted my life for years to come, so I felt it would be of interest to my children and grandchildren to tell them my story.
On November 16, 1942, my 21st birthday, I received a notice from my draft board classifying me "1 A" for the draft.  I was working at the time in a defense plant building airplanes for the Navy.  My company tried to get me a deferment, but I ended up in an induction center in March and was sworn-in to the Army.  I did some basic training in Miami Beach, and then was shipped to Lincoln, Nebraska to attend aircraft mechanics school.  One day I noticed a bulletin requesting applicants for special engineering courses.  Those applicants with an IQ in excess of 120 were accepted for this program.  I then was sent to the University of Minnesota.  The Army desperately needed engineers so they started this program to graduate engineers in two years instead of the usual four.  After about a year, the war was now going our way and the need for engineers no longer existed, so they broke up the program, and I was lucky enough to get back to the Air Corps.  Most of the guys ended up in the infantry where they suffered severe casualties. Instead of sending me back to aircraft mechanics school, I was mistakenly sent to aircraft gunnery school in Las Vegas (I was actually too tall to be an air crew member, but I signed a waiver to stay on.)

From there we went back to Lincoln where we were assigned to bomber crews and then transferred to Alexandria, Louisiana for combat training.  We then went to Kearney, Nebraska, where we picked up a brand new B-17 to ferry to Europe.  We managed to get the airplane to Ireland where we left it for further modifications, and were taken to Nuthampstead, England, the base for the 398th Bomb Group. My pilot at this time was Lt. Hancock who was originally an instructor pilot on B-17’s.  Lt. Comstock was the co-pilot and had trained on B-24s.  Lt. Comstock had never flown in a B-17 before joining our crew.  Lt. Hancock did not want anyone as his co-pilot who hadn't been trained by him.  He saw to it that Lt. Comstock became fully versed in the B-17 bomber well before we were sent into combat.

Into Combat
Our first mission was to Mannheim, Germany, and I was assigned to fly as tail gunner replacing Peterson, who was in the hospital.  We were awakened before 4am, and had breakfast, usually consisting of powdered eggs.  We then proceeded to a briefing where a curtain covered a map.  The curtain was drawn, and the map had ribbons showing our route to the target area.  We then took off and gathered somewhere in the English skies and formed into formations.  Each squadron was at slightly different altitude to avoid collision.  Each bomb group entered the target area separately.  When we neared the target, anti-aircraft was heavy and suddenly I felt like someone had kicked me in my backside.  I reached behind with my gloved hand, and it came back with blood on it.  I called the pilot on the intercom and he suggested that Davis come back to the tail to tend to my wound.  Instead, I grabbed a portable oxygen bottle and crawled back to the radio room.  Jack Davis met me there and cut open my flying suit, then put sulfa on the wound and some bandages.  He asked me if I wanted a shot of morphine, but I declined.  Ten minutes later I called him back to give me the shot. The pilot shot up a red flare when we returned over our airfield to signal we had wounded on board, and we received permission to land first.  When we landed, an ambulance followed us down the runway, and I was carried out on a stretcher.  I was taken to a field hospital where all the other patients were infantrymen.  I received quite a bit of ribbing from them, being the only airman in the ward.  Lt. Hancock visited me while I was in the hospital.  He told me that if I thought getting shot on the first mission was a bad omen, and with my background as a mechanic, he would probably be able to get me a job on the ground.  It would have been a smart thing to do, taking him up on his offer, but pride wouldn't let me quit.  I stayed in the hospital more than three weeks and was not on flying status for at least another three weeks while I received individual training from the squadron lead bombardier.  By this time I had missed many missions and Lt. Hancock had been promoted to Captain, and became a command pilot.  Lt. Comstock became our pilot, and I became the bombardier for our crew.

Toggliers
They referred to those of us who received training on the job as toggliers.  The only thing we did not learn was the use of the Norden bomb sight.  Only the lead aircraft and his wingman had bomb sights.  When they dropped a smoke marker, that was the signal for the rest of us to release our bombs.  This was referred to as pattern bombing.  When I was a prisoner later on, I marched through Nurenberg and I could tell where every airplane was in the formation from the bomb craters.  The first two missions that I flew as bombardier were especially nerve racking.  On both occasions, flak hit the Plexiglas nose cone, and from then on I was a nervous wreck.  It was a rare occasion when we returned from a mission without holes in our airplane from the heavy flak over the targets.  I flew 18 missions with Lt. Comstock, and by this time the crew had enough missions to go home, while I only had 19.  I was then assigned to Lt. Jacobs’s crew, and flew another 10 missions with them.  We were shot down on what was for me my 29th mission.  The target that day was the marshaling rail yard at Kassel. Over the target area we received a direct hit from an 88mm shell in one engine.  The pilot was unable to feather the prop, and the engine vibrated so badly that eventually it shook itself out of its mount, and fell to earth.  Another shell punctured our gas tank, we had gasoline pouring throughout the airplane.  When we were headed for a crash landing, we all thought that the plane would certainly blow up when we hit the ground.  But, miraculously, we bellied in on a farm in Germany, and the plane finally skidded to a stop without blowing up.

Prisoner of War
We all managed to get out of the plane except the navigator, Lt. Clinesmith.  He had stayed up in the nose instead of following me out of there.  We were never supposed to be in the nose of the airplane during takeoffs and landings, but he evidently froze. The crew dragged him out of the wreckage but he was unconscious and had evidently been crushed during the landing.  We looked around and saw a town in the distance but no one in sight.  Looking up we noticed two P-51 fighters had followed us down, and as soon as they flew away, a truck came along with soldiers and we were taken as prisoners.  We were put into a local jail that night, where our navigator died from injuries he had sustained in the crash.  The following day we were put on a train going to an interrogation center.  We weren't on the train 10 minutes before the train was attacked and strafed by US fighters.  We finally arrived at the interrogation center (Dulag Luft) where we were interrogated.  After 10 days there, they assembled 200 prisoners and marched us into town where they loaded us into boxcars.  Each end of the train had an 88mm anti-aircraft gun mounted on it.  Ten P-47's with bombs under their wings were circling the next town when our German gunners started to fire at them. That's all our fighters needed.  Five bombed their original target, and five bombed the hell out of our train.  That was the end of our train ride.

Stalag 7A
We now were on a forced march all through Germany to our permanent prison camp, Stalag 7A, Mooseberg, Germany.  On the way we slept on the ground, relieved ourselves wherever we were, and had very little food.  Every time we heard an airplane, we had to try to hide in a ditch or under trees so the airplanes would not strafe us.  They had no way of knowing whether we were German troops or prisoners. At Stalag 7A, things were far from great.  All we had to eat were a meager supply of Red Cross parcels which were soon gone.  The Germans gave us a slice of bread and some soup each day, and that was it.  The beds consisted of wooden bunks three or four layers high with mattresses of straw.  There was one water spigot outside serving several barracks.  Many of the men were infected with lice, because of their inability to shower and keep clean.  We never knew what the next day would bring.  There was always the possibility that we would be shot by Germans or killed during air raids.  Finally, early in May, Gen. Patton’s tanks came through and we were freed.  I was only a prisoner for 60 days, and lost 35 pounds.  Imagine the shape of those who were held prisoner for years...

Some Interesting Statistics
There were over 12,000 B-17's built, and over 4,500 were lost in combat.  The 398th Bomb Group flew 195 missions and lost 70 aircraft in combat, 50 more were abandoned on the continent after forced landings, and 33 damaged so severely in England, that they were reduced to salvage.  Another interesting statistic:  in August, 1944, there were five crews, of 10 men each, assigned to the 398th as replacements.  My crew was the only one of the five crews to finish their missions, and they were without me and the navigator, who were both shot down flying with other crews.  8 men out of 50 finished their missions and were sent home.  8th Air Force records reveal that the average airman lasted 14 missions.  The 398th Bomb Group consisted of four squadrons of 12 B-17's each.  This group lost 296 men in combat and 298 were taken as prisoners.  It is worthy of mentioning, that our targets were all strategic military targets.  We did not bomb cities.  Our bombs were aimed at aircraft factories, oil processing plants, railroad marshaling yards, ball bearing plants, and communication centers. The 8th Air Force was active in the European theater, supporting our forces on the ground.  There were many other Air Forces in other theaters of operation including the Pacific, India, Burma, etc., but the 8th Air Force was the largest.  Over 350,000 men served in the 8th, and the 8th Air Force lost more men than the Marines and the Navy combined during World War II.

Awards
My awards consisted of the Purple Heart, The European theater ribbon with 4 battle stars, the Air Medal with 3 Oak leaf clusters, the American theater ribbon, the Victory ribbon, the New York State Conspicuous Service Medal, the Prisoner of War Medal, and the Good Conduct Medal.

Note: Gerry Terres, the waist gunner on the Jacobs crew ended up as a professor at Tufts, teaching immunology and physiology at the medical school.  I am also attaching my list of targets we bombed.  I hope this gives an idea of what the air war was like --with at times-- over 1000 bombers in the air at the same time."