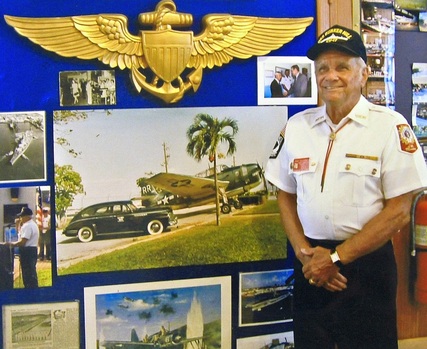 Ray Rivera at the NASFL Museum
​Ray Rivera was born in Bronx, New York where he attended Samuel Commpers High School. It was perhaps part of his ancestry of seafaring peoples from the French region of Corsica, that Ray was interested in the Navy ever since he can remember. At 13, he joined the group American Blue Jackets as a way to prepare for a career in the Navy. At 16, he was finally a member of the US Navy and on his way to the South Pacific on the USS Bunker Hill-- where he celebrated his 17th birthday. He became a 2nd class Petty Officer. Ray recalls that he was aboard the aircraft carrier on May 1945, when it got attacked by Japanese kamikaze pilots. He was below deck on his way to the galley, when the first plane hit the ship. He was immediately assigned to “damage control.” The fires raged on deck, and heavy smoke infiltrated into the decks below, killing many men. The crew of the Bunker Hill suffered from the loss of 346 sailors and airmen killed, 43 more missing (and never found), and 264 wounded. The damaged ship returned to Pearl Harbor, and then onto Bremerton WA, for repairs. When the war ended, the Bunker Hill became a “Magic Carpet” taking troops back and forth, throughout the South Pacific. Ray then got transferred to Little Creek VA, to become part of the Underwater Demolition Teams (UDT), also known as Frogmen. The UDT were an elite special-purpose force established by the United States Navy during World War II. Their primary function was to reconnoiter and destroy enemy defensive obstacles on beaches prior to amphibious landings. They were the precursor to the present-day SEALs.

Ray was discharged from the Navy in 1947 and joined the reserves. In 1950 when the Korean war started, he was called to active duty. He was assigned to the USS Grand Canyon AD-28, a destroyer tender (a ship designed to provide maintenance support to a flotilla of destroyers or other small warships). He was also on a tour of duty in the Mediterranean. Ray was awarded several medals: American Defense, Asiatic-Pacific-Campaign two battle stars, Victory medal, Liberation of Philippines, the Presidential Unit citation, as well as other Korean ribbons. Ray got discharged in 1953, and moved to Florida. He then joined the Veterans of Foreign Wars, and became Commander for 9 years; then District Commander for 2 ½ years in Hialeah, FL. Ray is married to Alice and they both live in Pembroke Pines. They have three children and many grandchildren and great-grandchildren. Ray Rivera has been one of the most active members and helpful volunteers of the NASFL Museum since 2006.
- Click on thumbnails to read descriptions -
Images from Ray Rivera's WWII Bunker Hill Cruise Book 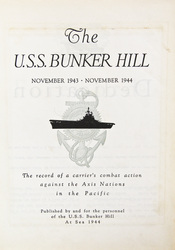 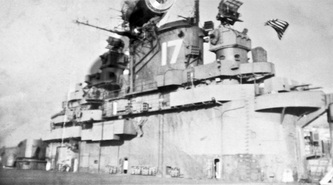 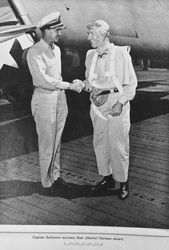 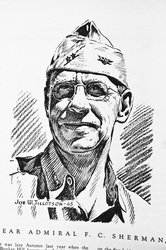 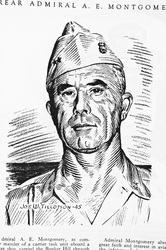 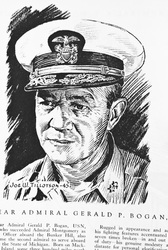 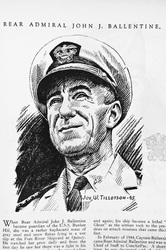 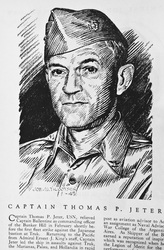 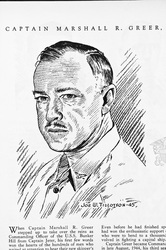 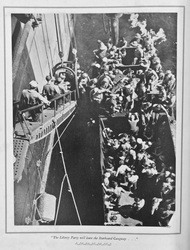 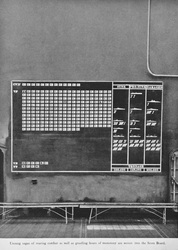 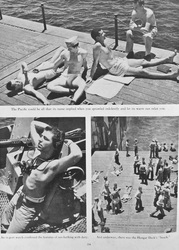 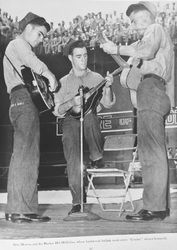 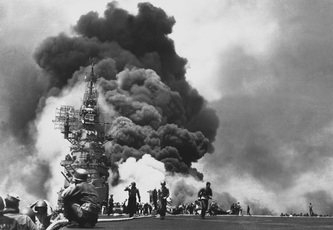 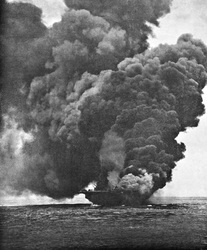 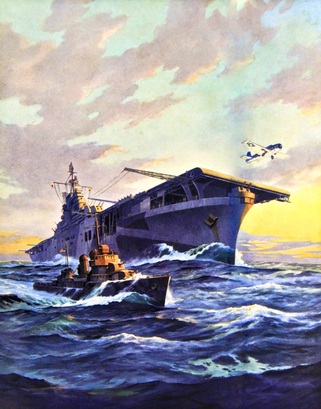 U.S.S Bunker Hill vintage art
USS Bunker Hill was one of 24 Essex-class aircraft carriers built during WWII for the US Navy. She was commissioned in May 1943, and served in several campaigns in the Pacific Theater of Operations, earning eleven battle stars and a Presidential Unit Citation. The ship was named for the Battle of Bunker Hill. It was the second US Navy ship to bear the name. During the remaining months of WWII, the ship fought in the Battle of Iwo Jima; the 5th Fleet raids against Honshū, the Nansei Shoto and the 5th and 3rd Fleet raids in support of the Battle of Okinawa. The ship became one of the most heavily damaged carriers to survive the war. The Museum is offering this vintage image of the USS Bunker Hill on their Online Gift Shop. All proceeds from the sales benefit the Museum.
Ray Rivera was among the Biographies and Portraits of World War II Veterans
Presented by Students of Miami-Dade County Public Schools
Intergenerational Service - Learning Oral History Project
VIDEO: Ray Rivera relates his experience about the attack on the USS Bunker Hill
BACK TO VETERANS HISTORY
Museum's Books | Memberships | Newsletter | NASFL History | Flight 19 | Memorial | Volunteer | Media Kit