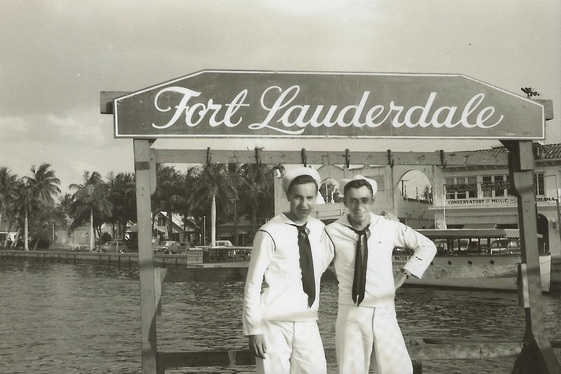 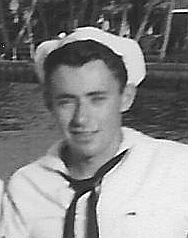 “Sixty-eight years after five Navy torpedo bombers took off from Fort Lauderdale and vanished without a trace, artifacts have surfaced that bring one of aviation's greatest mysteries into sharper focus. Among them are an aviator's flight logbook, a citation personally signed by President Harry Truman and never-before seen photos of crew members. All had been sitting unnoticed in an envelope for about 50 years in the home of a crew member's family.” —By Ken Kaye, Sun Sentinel 4:49 a.m. EST, November 11, 2013.

These artifacts were donated by the family of Walter R. Parpart, Jr. ARM3c USNR. Walter was the Radioman with the lead plane FT-28, piloted by Instructor Lt. Charles Taylor. There was no known photograph of Walter, and there are no original artifacts known to the public directly relating to Flight 19. Until now, when Mrs. Maureen Campbell Clark of Manchester, New Jersey contacted the Museum at the urgency of her nephew, Kenneth Campbell.

"As per our telephone conversation, my mother Dorothy Campbell was married to Walter Reed Parpart, Sr. (1959-1963). Young Walter was an only child. He so wanted to join the navy he pleaded with his dad to sign him in at age 17. His mother was American of Irish heritage (McMahon) and his father's family was from Newburgh, NY. of Basque heritage. After the tragedy as years passed his mother drifted into a deep depression and blamed his dad for her loss until her passing... His father seemed to accept the 'black hole, weather anomaly theory'.  I believe his brief marriage to my mother prior to his passing was brief but joyful. The seven photos processed very well and have two with Walter Parpart, Jr in dress whites. There is no mistaking him as he is the image of his dad. Perhaps you can identify his buddies. There are letters from Mrs. Katherine Taylor and a Mr. Gorman, explaining his weather anomaly, black hole theory. I will be forwarding all to you as soon as my nephew Kenneth Campbell who alerted me to this web site, comes this week."

"I believe if you check the Log Book, Walter got his wings and rating in May '45. It was the days after the peace acceptance. He was signed into the Navy after High School graduation, so probably June 1944 at age 17. He probably did 3 months of basic training and 3 months of radio school. Look to the log book as to when he first started flying. I think he was maybe 18 1/2 in Dec. 1945. His father's address of 96th St, ( on the letters) when my mom met him was an Apartment building and the family had lived there many years in the Bay Ridge section of Brooklyn. I have no idea which High School. Maybe Fort Hamilton HS or Brooklyn Tech HS.  His dad worked as a civilian employee of the War Department at the Jersey City Quartermaster Depot in Jersey City, NJ. during World War II.  I have a certificate for his service in that capacity.

I do remember Walter Sr. saying the war was winding down so he felt his son would do alright in the Navy. I guess all the Navy records were lost in the fire set by the Jesuit during the Vietnam War. Is that the case? As far as stature, Walter Sr. was not tall and by the looks of the picture nor was Jr. I remember my mother saying she thought they chose smaller size boys to keep the weight of the planes lighter. I wish I could add more to his profile but I know he was very much loved by his family and happy he will take his rightful place in history. Walter and his father were very close. No longer the boy from Brooklyn with no known picture. That made me feel terrible. I am delighted to be the conduit that made this story come to life with the help of your efforts and the Museum. I told Ken, we helped make this year's Anniversary a memorable one. Of course my mother Dorothy Campbell Parpart Martin was the historian in chief. Yes, she remarried and held on to these items until she passed in 1983.

NOTE: If you are able to identify Walter's friends in the photographs please let us know. We are trying to research who they are: E-mail the Museum