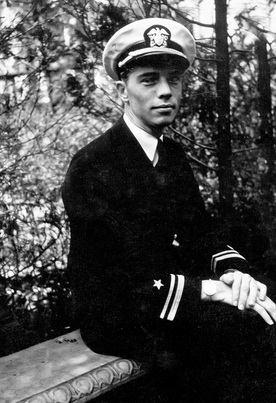 William J. Hopwood was born on November 22, 1918 in Philadelphia, Pennsylvania.  Graduated from Penn State University in 1940, in which year he joined the pre-war Naval Reserve at the Philadelphia Navy Yard (which no longer exists).  In February of 1940 William was called to active duty as a radioman, but wanted to apply for Officer training and was able to transfer into flight-training. He was then called for what was then termed "elimination" flight screening at the Philadelphia Navy Yard airfield.  He took 10 hours instruction and soloed in one of the old biplanes built at the Naval Aircraft Factory in Philadelphia. Then he was sent to NAS Jacksonville, Florida for basic flight training in May 1940.  William went through Ground School and 6 months of basic flight in the Stearman and Ryan aircraft at Jacksonville, but flunked out in early intermediate flight training in SNJ's. As he recalls: "I was never a hotshot pilot but I'm glad I got the flight  experience I did.  I had some good instructors, the last being a very tough U.S.Marine Corps officer, who by  telling me to find something else to do, probably saved  my life. With the flight experience I had gained, limited though it was, and with my communication background (I was a licensed Ham operator), I was commissioned  as an Ensign and assigned to teach Communication basics to Aviation Cadets at the NAS Jax Ground School. Then when the Japanese caught us all by surprise at Pearl Harbor, I was transferred to NAS Jacksonville Communications Dept and its code room where I spent many hours coding and decoding operational message traffic."

In October of 1942, William J. Hopwood was sent to NAS Fort Lauderdale (which was then under construction), and was made the NAS Communications Officer.  In 1944, he was transferred from NAS Fort Lauderdale to NAS San Juan Puerto Rico for a short time, and then sent to NAS Coco Solo, Canal Zone as their Communications Officer, with collateral duty as Comm. Officer for the Commander Panama Sea Frontier. He remained here until the war ended in August of 1945. After the war, William returned to live and work in Miami but stayed in the Active Naval Reserve and was re-called to active duty as a LT CDR during what was called "The  Korean Emergency" and assigned as a Crypto Center Watch Officer CNO in Washington, DC. Then after a few  months, was assigned to duty as one of the Navy Department Communications Watch Officers, at the Office of Chief of Naval Operations in Washington DC from 1950-1952.  When he was released to inactive duty in 1952, he remained in the active Reserve until his retirement as Commander, when he reached age 60 in 1978. He has remained in the Retired Reserve since that time.
Commander Hopwood has been a source of great information as he brings to mind his memories of the Naval Air Station Fort Lauderdale base: 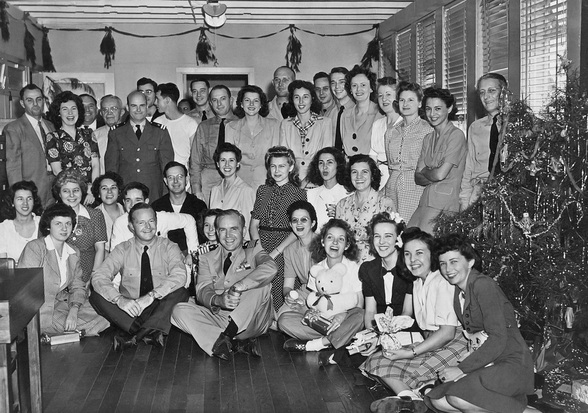