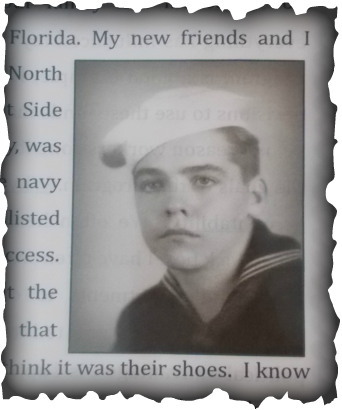 "It was the year 1942, our family had moved to Fort Lauderdale from Pompano Beach, Florida. My new friends and I often went swimming in the North fork of the New River: the West Side basketball park was located close by, and it was usually closed, but when the navy was using it for enlisted recreation, we could gain access. There was something about the sailor dungaree uniforms that impressed me but I honestly think it was their shoes. I know this sounds foolish but I had never seen shoes that looked so good. I am certain the sailors really worked at keeping them shined. I decided then, that I wanted to join the navy.

In 1943, I was fourteen years old, and several friends who were older, had enlisted (many under age). Although I was probably the youngest in our group, being accepted by them was never a problem. When I decided to enlist in the navy, I knew my dad would never give his consent. That had never stopped me before, and it certainly wasn't going to now. I brought the application papers to a friend who signed my dad's signature and assisted filling out the information. In a very short time, I was sitting on a Greyhound bus bound for Miami. Before the driver closed the door, my Dad appeared, and told me to get off the bus. He had words for the navy recruiter as well. Thereafter, the same recruiter often visited our home telling my Dad 'all that would be necessary was for him to sign the paper.'  He would not be signing a falsified form. I distinctly remember hearing him say 'I have had navy for breakfast, dinner, and supper, I cannot keep him in school so maybe the navy can do something with him.'   Well, he signed the paper confident that he was not signing a false document. Shortly after, I was in Miami for a physical, and the same night, on a train to Jacksonville for boot camp.

On completion of boot camp, I was given a short liberty before being sent to NAS Banana River. My first assignment was a job in the chow hall scullery, washing food trays. The boat facility was my next assignment. The boat house had covered boat slips with living quarters on the upper deck. Duties encompassed operating small boats for crash rescue, transporting flight crews to and from aircraft parked on the buoy, and tending the wind line at night. The wind line was a string of lighted buoys providing wind direction for airplanes landing on the water. The lighted buoys were transported in two motor whale boats, to be attached to an anchored buoy during night hours.

My next duty was a 42' Torpedo Retriever, pulling a barge with a large crane to Titusville, Florida. Bombing targets were to be constructed in a place called Mosquito Lagoon (the name was certainly accurate). I was armed with a 38 cal. revolver, and left alone on the barge for twelve hours every other night, providing security. Guard duty on that barge was my only responsibility. On one of my free days while walking along the shoreline, I found a small flat bottom boat. Fixing the leaks by insertion of caulking between the planks and fabrication of some type of sail was not a problem, as I had done this type of work previously. When the work was completed, I had a sail boat. Every day thereafter on my days off, I sailed my boat for recreation. After completion of the barge security assignment, I returned to NAS Banana River. Swimming side wheels on the beaching crew was my next assignment. The PBM aircraft required beaching wheels for parking on the ramp. Finally, I got the assignment I wanted. That was in OTU (Operational Training Unit). Responsibilities were working under a Petty Officer who was called a plane captain. Duties were performing maintenance, and opportunity to fly on our airplane. CAC (combat air crew) students were a complete crew, receiving final operational training. I learned a lot about PBM maintenance, and in-flight operation of the flight engineer panel during those training and patrol flights. The flights involved gunnery practice, and long range submarine patrol off the Florida coast. The aircraft was equipped with depth charge bombs, and three fifty caliber machine gun turrets, with guns in each of the waist hatches. The CAC (combat air crew) students had completed trade and gunnery school, prior to coming to Banana River for PBM operational training.

Our planes were parked on the ramp flight line. After engine start, taxi steerage was a long steering bar attached to the tail beaching gear.  Hand operated brakes were on the main beaching wheels, and tail wheel steerage was guided by pavement marking.  Although the pilot controlled the engines, ground taxi was the responsibility of the beaching crew.  When approaching the launching ramp, brakes were applied.  The steering bar was removed and a rubber-track tractor was attached for braking during launch.  A quick disconnect permitted release after launch.  Long lines were attached to the main beaching wheels, for retrieval after the aircraft crew members disconnected them.  The tail beaching wheel was disconnected by a beaching crew member wearing waders, and on command, would release the line attached to the tractor.

Starting the engines while parked on the ramp or buoy, required a fire watch on the wing. One crew member with the appropriate extinguisher gained access to the top of the wing, through what was known as the deck hatch, located aft and between the engines. The ordinance crewman usually secured or disconnected the line attached to the buoy. If sea anchors were required, another crew handled it through the waist hatches. Sea anchors were made of canvas on a ring, resembling a parachute with an opening, restricting water flow through it. They were deployed on command from the pilot, to assist with water taxi. Fort Lauderdale, Florida was close enough to go home often, for weekend liberty. Fort Lauderdale was a navy town with a naval air station, and supporting boat facilities at Port Everglades. Ship visits to the port for shore liberty, often resulted in sailors on every street. My cousin was stationed at the boat facility. During a home visit, I once accompanied him on his boat to retrieve used practice torpedoes for reuse by airplanes from the Naval Air Station Fort Lauderdale. That cousin then managed to accompany me on one of our local PBM flights out of NAS Banana River."   -- William Law
- Click on images or arrows to view slide-show -