Pfc. William Earl Lightfoot came from a long family line of military men and women serving during the Revolutionary War, Civil War, World War I, World War II, Korea and Vietnam. Three members of the Lightfoot family would disappear while in service. William Earl Lightfoot was a Flight 19 crewmember aboard one of five planes that would vanish over the Atlantic on December 5, 1945. In a separate incident in 1944, his brother Eugene-- a 2nd Lieutenant with the U.S Air Corps-- was shot down in his plane, over the British Straits. William and Eugene were never found.

William was born in 1926 in Clayton, New Mexico, to Ora Lee & John Arnold Lightfoot (a Highway Engineer serving in both WWI and WWII). Ora and John had 6 children: Wanda, Geraldine and Norma, and boys Claude, Eugene and William.

In 1943 William joined the U.S Marine Corps in Lexington, Illinois. He continued with advanced training in TBM Avenger aircraft at the Naval Air Gunners School in NAS Miami (last recorded date was November 9, 1945). He was then transferred to NAS Fort Lauderdale just before his disappearance with Flight 19.  Pfc. William E. Lightfoot, 19 years old, was the only crewman besides the Pilot-- 2nd Lt. Forrest Gerber USMCR-- aboard a TBM-1C Avenger (FT-81 from NAS Fort Lauderdale). Flight 19 remains as one of the great aviation mysteries.

"My name is Claudia Lightfoot-Doyle and I am 61 years old.  William Lightfoot was my uncle (My dad's brother). One sibling is still living at age 77, Norma Jean (Lightfoot) Hayes. My brother, William Eugene Lightfoot, alive and living with my husband and I, is named after my father's two brothers lost in WWII (Eugene) and post WWII (William, with Flight 19).  Eugene was a pilot shot down over the British Straits, and like his brother William was never found. My father Claude, was the only one (of the Lightfoot brothers) that came home alive from the war. Norma, my brother and myself are the only living Lightfoot's left of this family line of my grandmother Ora Lee (McMinn) and John Arnold Lightfoot.

Anyway, I have some documents and pictures recently located in some of my grandmother's possessions. I have the actual funeral program for the 14 men lost, and pictures of the room where the memorial was held. One with it empty, and the other filled with people during the commencement of the memorial. It shows 14 American flags on the stage. There are two pictures-- I would imagine is William's flight crew-- with their plane, and a picture of just the plane. I have the original certificate issued to my grandmother (like a death certificate) from the military, stating he was lost at sea December 5, 1945.  I have pictures of William as well.

My father learned of his brother's disappearance on a ship, when he was coming home from the European theater-- when they announced it. How horrible to learn that way!  My family bled red, white and blue, let me tell ya. My mother Sara, was a Rosie-the-Riveter working at Douglas Aircraft in Long Beach, CA. She is still living at age 89. She riveted the wings. Her first husband was killed in WWII. She was 18 then (they were only together for 2 weeks when he was deployed). He was lost in the USS Scorpion submarine, never found as well. It went down off the South Pacific near Japan. He is listed at the war memorial in the Manila American Cemetery, Fort Bonifacio, Manila, Philippines. His name was Jack Townsend." 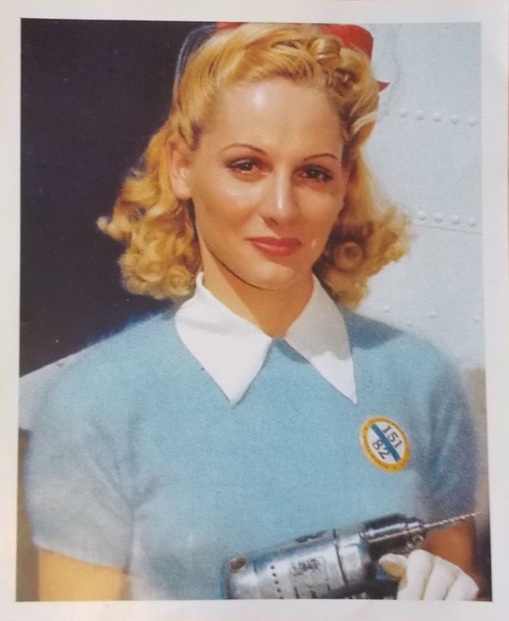 "Sara Lou (Strader) married Jack Townsend July 31, 1943 when she was 18. They were only together for 2 weeks when he was deployed during World War II. He was lost in the USS Scorpion submarine that went down off the South Pacific, near Japan. He was never found as well. Sara later married my father, Claude Arnold Lightfoot (brother of Flight 19's William Lightfoot) on May 22, 1946. Here is the article about my mom.  In the picture with all the other Rosie's, my mom is in the back row, left.  She's holding  her riveter wearing white gloves and a blue sweater shirt with a white collar. She was 18 and much younger than the rest of the women. The photo may have come from files at Boeing which used to be Douglas Aircraft in CA, later renamed McDonnell Douglas (then Boeing took over). After the war, my father Claude worked at the same factory for 30 years. Below, are also photographs of her father, Joseph Thomas Strader in his World War I uniform, and his draft card."