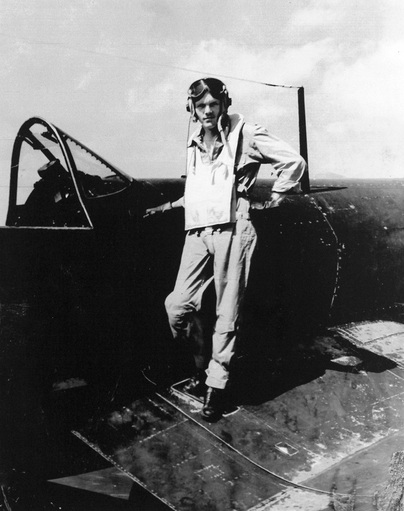 Robert D. "Woody" Woodbury was born in 1924 in St. Paul, Minnesota, the only boy of four siblings. At a young age, he learned piano and at 12 began his music career by forming a 10 piece band. They played at middle and high school functions. He also learned to play trumpet and discovered his innate sense of humor mixed with his piano was a very successful combination that could be crafted into a career. Next, he formed a trio, playing at rural roadhouses and around the St. Paul-Minneapolis area.

In 1942 his budding career had to be put on hold as the United States entered World War II. Woody joined the Marine Corps at 18 and served from 1942-1958 as an active duty fighter pilot instructing young Marine Lieutenants and Navy Ensigns to fly the single seat Grumman F4F Wildcat and F6F Hellcat  aircraft. He taught fighter pilot tactics at the Daytona Beach, Florida, Naval Air Station. The war was heating up at a feverish pace and he was transferred from NAS Daytona Beach to the Marine Corps Air Station at El Toro, California, 4 miles inland from Laguna Beach. He was taught to fly the F4U Corsair, America’s top-line fighter plane. He was again transferred, this time to Miramar, California and was in the first wave of pilots poised to invade Japan. He recalls it was a quietly nervous time for most Marines.  But suddenly fate and luck intervened as  the a-bomb was dropped and that action kept Lt. Woodbury alive.

At war's end he was released from active Marine Corps duty and restarted his comedy antics, first in St. Paul and Minneapolis, then to entertaining in Daytona Beach where he began to be “noticed” as a funny guy.  This led to Jacksonville for a strong successful year as lounge entertainer at the two top supperclubs in that city, the Peacock and Embassy. Miami night club owners soon heard of him and he accepted an enormous contract at the then “World Famous Clover Club”, easily the top cabaret in all of South Florida. Woody “reigned supreme” as the saying goes-- with intervening bookings in Las Vegas--- long before what that city is today, until June 1950 when the Korean War broke out. He was but one of so many Marine aviators recalled to active duty. Ordered to report to the Marine Corps Air Station in El Toro, Woody resumed flying, but this time in the F9F Panther Jet. Much like all aviators, he fell in love with all jet aircraft and flew every waking hour or so it seemed. While he missed the hell and devastation of WWII, such was not the case in Korea to where he was ordered. Assigned to VMF-115 Squadron in Marine Air Group 33 of the First Marine Air Wing, Woody flew just about a hundred combat missions. He flew his single-seat jet fighter alongside baseball’s immortal Ted Williams, John Glenn (later the U.S. Senator from Ohio), and Major Jack Bolt, who was the only pilot in Marine Corps history to have been an Ace in both WWII and Korea.

Now a Captain in the Marines, Woodbury had always wanted to be assigned to VMF-214 the Black Sheep Squadron. At first it never happened.  While they were in Korea Jack Bolt had been a 214 pilot in the previous war and spoke glowingly about his many Black Sheep flight mates and the interactions with many enemy airplanes. It was strictly “in the Marines only” conversations. After completing his combat tour, Woody Woodbury remained in Korea and Japan performing his comedy and musical tomfoolery in many hospitals for wounded military as well as  from all of the Allied countries.  He says that "seeing firsthand the mayhem, brutality, and the nightmarish awful smell of what war deals out, left a darkly indelible mark in him."

Following the Korean War and re-assigned to MCAS El Toro for a short time,  he taught older pilots to transition from flying the slower, propeller driven aircraft into the “feather – touch-- control” needed in the much swifter, sleeker, Grumman F9F swept-wing Cougar jets. One day lo and behold-- he was instructed to report to his Executive Officer who unceremoniously said, “Here they are, you lucky stiff!”  Woody was frozen in question marks. He finally asked, “What are “they”, Sir?” The Colonel said,  "They are your orders. You are a replacement pilot. You’re going to the Black Sheep Squadron.”  Woody left that Headquarters Office and it took him about a month to discover, then say, “Thank you, Jack Bolt, now up in heaven, because you’re the guy who got this done." Captain Woodbury flew as a Black Sheep aviator until his departure from active duty.

Finally released, Woody was immediately back into civilian show business in Miami, and then at the insistence of his theatrical agency, moved to Fort Lauderdale. While he balked at first about leaving Miami, circumstances dictated it was a wise move, and Fort Lauderdale became Woody’s greatest showbiz love. He still maintains, “In the entertainment world, everything  good  happened for me as soon as I started performing in the beachfront Bahama Hotel."  Tapped in 1962 by the Don Fedderson Company, Woodbury agreed to replace Johnny Carson in New York City on daytime television as Carson "graduated’"  to host  “The Tonight Show” on NBC-TV. Woody also signed to do about half a dozen motion pictures, and later in 1967 he  began hosting "The Woody Woodbury Show" a musical entertainment/variety show from Hollywood, which later evolved into the “Merv Griffin Show”. Interwoven into all this fabric he  also recorded several successful comedy LP phonograph records  “sandwiched among” his TV stints. All in all, it’s been a magical life for this guy, father of two great kids, Kimberly and Rand, but "their dad is  not much of a golfer anymore."

Robert “Woody” Woodbury is a resident of Fort Lauderdale and was inducted into the City of Fort Lauderdale’s Walk of Fame on Saturday, May 26, 2012.  On February 18, 2014, Woody was accorded “Woody Woodbury Day” and was bestowed this honor by the Hon. Jack Seiler, Mayor, in a ceremony at the Fort Lauderdale City Hall. Not only has he entertained millions as a comedian, actor and television personality, but also has served his country as a Warrior, a "Piano Pilot", and a proud, lucky, Marine through  two wars.
Gallery of Photos from the Leatherneck, Magazine of the Marines, September 1953 Edition
Article by MSgt. Roy Heinecke, Staff Correspondent - Photos by TSgt. R. E. Armstrong, Staff Photographer
From the personal collection of Mr. Woody Woodbury